We met Anna Luten through our shared interest in cycling. Once we got to chatting, we realized she had a unique perspective as a cycling advocate from the bike capital of the world, the Netherlands, now living in New York City. Our NYC office is especially curious to hear her experience of cycling in both places. 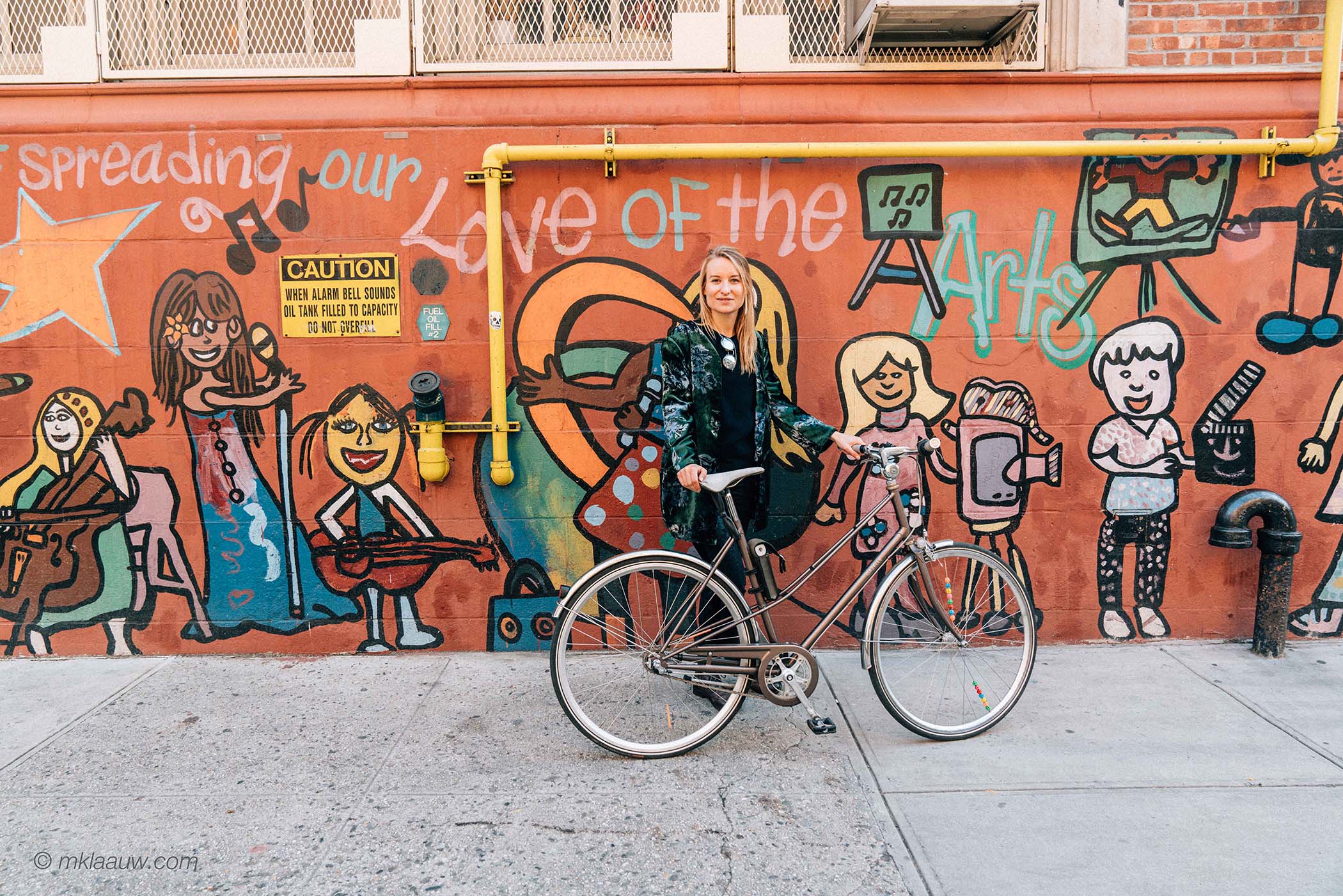 Anna Luten was appointed Bicycle Mayor of Amsterdam in June 2016 and has since been working to improve safety and increase adoption of bicycling in cities worldwide.

Anna is known for her enthusiasm and curiosity, her desire to learn and grow, and her high energy. Anna works as an independent consultant with entrepreneurs, small and mid-sized businesses, and corporate clients. She is currently working on an education platform for children to enable kids to navigate through the city in a safe way by themselves.

Hello Anna. We are happy to introduce you to the Cycling Dialogues. Having grown up in the Netherlands, when were you first introduced to cycling and how?

I actually still remember the first time riding my bike without training wheels. It was in our backyard on a sunny day. I must have been 4 or 5 years old. It was magical, my dad pushed me and there I went—and there I fell in the soft fresh green grass. In the Netherlands it’s common that your parents teach you how to ride a bike, first with training wheels and then without. I still remember what my bike looked like, the old gray bike that was used before for the bike training of my older brother and sister.

After experiencing such a rich cycling culture in your home country, how was the transition when you moved to NYC (US) where cycling is not as ingrained in everyday life. What are some cultural differences you’ve noticed between AMS/NYC? How have you adapted?

In the beginning the transition was quite big. Even though I grew up riding a bike and dealt with bikes every day because of my work, I was still scared to go on my bike in NYC. There was a barrier I had to overcome. It took me almost two months to get settled before I went on my bike for the first time.

I remember this moment well because it felt as such a relief, magical and lovely. I started laughing and realized what I had been missing. Riding my bike, I could travel further and explore much more of the city without getting tired of walking. Of course, there is a big difference riding your bike in NYC vs Amsterdam, but as soon as you know how to deal with the infrastructure and other road users surrounding you it becomes easy and fun.

Looking at cultural differences it’s of course important we keep in mind that Amsterdam started to improve the infrastructure for cycling already some 50 years ago. Cycling is much more engrained in Dutch culture. For example, I grew up with the bike and used it to go to school, meet friends, sport activities etc. Whereas in the States people see cycling more as a leisure activity. You dress up in comfortable clothing and you go out for a ride during the weekend for example and you don’t use your bike for your daily commute. This is changing though, also driven by the pandemic. More and more people are riding bikes in the city and it has become more popular for daily use.

NYC slowly started to improve its bike infrastructure some 15 years ago and they have made a lot of improvements so far. The shared riding system CitiBike is huge (Amsterdam doesn’t have such a big sharing bike system, most of the citizens own their own bike), which makes biking more accessible to a lot of New Yorkers, but the infrastructure still needs major improvements.

Another cultural difference is in the behavior and awareness of most of the car drivers in NYC compared to Amsterdam. I notice a lot of people speeding up while approaching a red light and most drivers are not aware of cyclists. The lack of personal cycling experience makes it more difficult to relate to their traffic behavior.

With that in mind, a key thing that I think is missing, is bicycle education for both cyclists as well as drivers. In the Netherlands most drivers ride bikes themselves or at least know how to ride a bike. When you’re learning how to drive a car, they are really strict in teaching about all other road users, especially the cyclists. In my opinion there’s a lack of education between car drivers and cyclists here in NYC. There’s no communication between them, which makes it dangerous. One other thing to keep in mind is the size of the cars. The same car model here is on average much, much bigger than in Amsterdam. There are many more SUVs on the road than in Amsterdam.

I’m currently working on a mobility/cycling education platform for children to teach the younger generation how to maneuver safely through traffic. Not only will this enable them to be safe today, it will also improve driver awareness of other road users as soon as they step into a car.

What’s the most surprising thing about cycling in NYC? (The good and the bad)

The ideal circumstances you have in this city. There’s so much space (because the streets are built for cars, the streets are wide) and it’s mostly flat. Let’s not forget about the weather: NYC probably has some 10 months of the year that allow for comfortable biking, definitely different from the rainy Netherlands. It’s a particularly easy city to navigate and it’s a beautiful city where there’s so much to see.

You need to know how to behave, though, while riding your bike in the city. You have to make sure other road users, especially drivers, can see you. You need to stay focused to avoid hitting a pothole or to get a car door slammed in your face. It can happen for example that one moment you’re on a bike path and next thing you know, you’re not. Some bike paths just stop in the middle of a street and then you find yourself right in the middle of traffic.

NYC has lots of opportunities for improvement and growth. The division of the space and the roads are surprising to me. Cars are prioritized pretty much everywhere and yet there are so many citizens who support improvements of the biking infrastructure. We should do better!

From your perspective as a mobility advisor, and having worked with local organizations in NYC: what do you see as the biggest challenges of cycling in the city?

Reducing the number of cars on the streets and the size of the cars. If we want to make changes we need to become radical in our car policy. But getting everyone aligned on this plan of building a better infrastructure for bikes, transforming car lanes and parking spaces into bike paths, cargo drop-off zones and restaurant or green spaces will cost time and energy. This requires a complete overhaul of the public domain and it will definitely be a longer-term plan. It will be difficult, but not impossible.

Making cities safe for cyclists and pedestrians will require streets that are human-centric.

In many ways, Amsterdam is the city of bikes. More than 60% of locals cycle daily, with over 40% commuting to work by bicycle. One reason for this is the extensive cycling infrastructure, but it is also a product of culture. Cyclists and pedestrians are given priority in the city ecosystem, and this ensures that health, happiness and community—byproducts of human-powered movement—are also Amsterdam’s priorities. It’s no coincidence that the Netherlands has the lowest road death in Europe, also three times lower than those of the U.S. as well.

Step by step, where every step will make a difference. Small changes in the beginning can have a huge impact in the future and we should not be afraid to make some drastic changes when it comes to car policy. Last but not least, let’s focus on education in parallel.

NYC has amazing local parks and what has been done with communal spaces can be a real inspiration for the Netherlands and beyond. Communities can drive decisions through their impact on local authorities. I find the way communities work together to get things done very impressive and effective—there are definitely some things we can learn from that.

How do you navigate the city while cycling? What tools do you use to make sure you get where you need to go?

It depends where I’m going and if I’m in a rush or not. Most of the time I will use Google Maps before my trip to see the best route options. When I know sort of where I need to go I’ll just jump on the bike and ride, following the signage along the street. Other times, if the route is more complicated or I need to be on time for an appointment I will use Google Maps while having my AirPods plugged in. NYC could use more wayfinding signage on the streets for cyclists, especially now that there are more cyclists on the streets.

Surely you consider wayfinding as part of the solution… What opportunities (if any) do you see to improve cycling wayfinding across the city?

When it comes to transportation it’s of course really difficult to streamline all different kinds of transportation and to communicate between different road users. Here I see an opportunity for wayfinding and signing across the city. I’m sure Mijksenaar can find ways in how to best communicate to cars, buses and trucks about other road users such as micro mobility users, cyclists and pedestrians. The other way around you could warn cyclists that they’re nearing heavy traffic or a delivery drop-off zone etc. This could be either with more traditional road signs, or you could try other modes such as stickers, street art, street bumps, pothole fillers etc.

As for messaging, it should not only be about safety. You could also think of encouraging messaging about how many miles you’ve cycled, your carbon footprint reduction, how many calories you’re burning by crossing the bridge etc. Let’s create some fun and make things interactive as well.

Thanks for the interview, Anna. We look forward to collaborating with you in future Cycling Dialogues projects!